Okay, here’s a tidbit of information I found to share with you about the bell tower of the Church of San Marco (in Italian: campinile di San Marco) According to A Brief History of Venice, by Elizabeth Horodowich, by 1150 this bell tower was serving as a lighthouse of sorts to help guide ships into the harbor. I have not as yet read specifically how it was lit. Presumably by torches, but how many, where positioned, etc? If anyone knows, please share in a comment. (And include your source, as well.)

Church bells throughout Europe rang to help monks and nuns know the hours of prayer, and became a way for common people to also keep track of time. The bells in the tower of San Marco, however, were unique and served quite different purposes. There were five bells altogether, each with its own name.

The largest bell was called la marangona. This bell rang at the beginning and end of each workday, summoning laborers to work and telling them when it was time to go home. 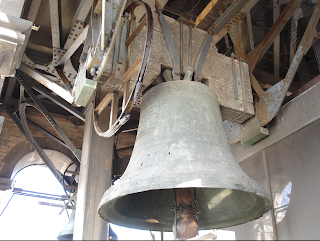 La nona (2nd largest bell) rang at the ninth hour. This would have been midday, or around 3 PM, on our present clocks. This remained the case on the European continent until the 14th century, with England being an exception. Later this hour shifted to around 12 PM and became the basis for our modern word, noon.

La trottiera (3rd largest) summoned the magistrates of Venice to “rush or ‘trot’ their horses” (see Horodowich) to the Doge’s palace. (We all know that Doge is the Venetian word for Duke, right?)

A bell called the pregadi (4th largest) announced meetings of the Venetian senate.

The smallest bell, and the most sinister one, was called la renghiera or la maleficio. This bell announced an execution was about to take place. 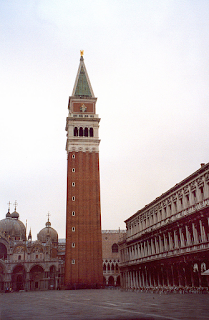 When recreating San Marco’s bell tower in the 12th century, keep in mind that it did not look like the bell tower there today. The present look of the tower was designed by Bartolomeo Bon in 1514. I have not been able to discover what the earlier tower looks like, if anyone knows. (Again, if you have any additional information or sources, please share in a comment.)

A Brief History of Venice:, by Elizabeth Horodowich

For the bell sizes: https://it.wikipedia.org/wiki/Campanile_di_San_Marco (I used Google Translate to translate information on the bell sizes into English.)

Posted by Joyce DiPastena at 7:00 AM

Hi Joyce. I visited the Church of San Marco in 1984. I have a photo album of my entire trip to Europe and might have a photo of the church. However I just had a Mastectomy and hurt very badly so I'll have to look through my pictures later, OK?
I'll see if I have a good shot!

Hi Mel! I'm so sorry about your Mastectomy! I know that must be very difficult and painful for you. I would love to see any pictures you have of the Church of San Marco, but absolutely no rush on it. Take care of yourself! Hugs and prayers coming your way!

I think that in the ancient time, 'civic' towers or belltowers used for a 'civic' purpose were quite common. Here in Verona, we had the Torre dei Lamberti which was a civic tower (the highest in Verona) and only tolled for civic purposes as you explained in the article.
Incidently, her biggest bell is also called Marangona. Maybe that was a common name for that kind of bell here in Veneto.

Thanks so much for sharing :-)

Thank you for this information, Sarah! Some things about Italy (like the "civic towers" vs the traditional "church bells") are so different than my previous research "comfort zone" of medieval England and France. It's been a challenge because of the specific year my current work-in-progress is set in, but I'm enjoying exploring this new medieval world of Venice. Interesting about the Marangona bell in Verona! That's another interesting piece of the research puzzle to know. :-)