Your 12th century character needs to visit the Rialto Market in Venice. How does he or she get there? If he is visiting Venice in 1170, like mine, the one way he does not get to the Rialto is via a bridge over the Grand Canal. 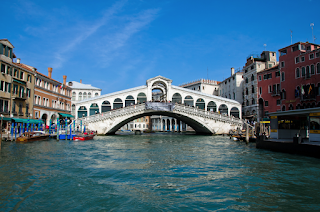 I began the scene I am currently writing with my character preparing to cross a pontoon bridge from the *sestiere (district) of San Marco on the east side of the canal to the sestiere of San Paolo on the west side where the Rialto Market stood. After all, several of my research sources cited there being such a bridge in the 12th century, and my story took place in the 12th century, right? So surely I was safe including a pontoon bridge in my story.

Wrong! The first bridge (which happened to be a pontoon bridge) to cross the Grand Canal was built in 1181—11 years after my story takes place! Prior to that, there was no bridge connecting the east and west sides of the canal. 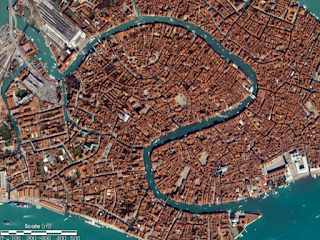 (Photo of the Grand Canal from space, courtesy of NASA photos--just remember, all those houses weren't there in the 12th century!)

In 1181 a pontoon bridge, also known as a floating bridge, was created by connecting several shallow boats together with wooden planks to allow people to cross the canal. This pontoon bridge was replaced with a wooden bridge in 1250. Wood, of course, is more stable than floating boats, but it is also flammable. This wooden bridge fell victim to fire in 1310, then collapsed in 1444 weighted down by too many people trying to rush across it all at once to get to a water parade. Finally the decision was made to rebuild the bridge in stone, resulting in the Rialto Bridge that we know today, built between 1588-1591.

So if you’re writing a story set in medieval Venice and want a character to cross a bridge to the Rialto, be sure to check not just your century, but your exact year to see what kind of bridge they would have been crossing. And if your story is set prior to 1181, whatever you do, don’t let your character walk across a bridge to get to the Rialto! Let him take a gondola. Or move his house to the San Paolo side. Or, like I decided to do, just fudge it and start the scene with him (or her) already at the Rialto. Unless it’s important to the story, does your reader really need to worry how your character got there?

*Sistiere – Venetian name given to its six districts. You can read more about each of these districts at The Six Venice’s Sistieri and at Go Italy: About Travel, which includes a map of the six sistieri (plural of sistiere).

My name is Stephanie Janet .This is a very joyful day of my life because of the help PRIEST OSAS has rendered to me by helping me get my ex husband back with his magic and love spell. i was married for 6 years and it was so terrible because my husband was really cheating on me and was seeking for a divorce but when i came across PRIEST OSAS email on the internet on how he help so many people to get their ex back and help fixing relationship and make people to be happy in their relationship. I explained my situation to him and then sought his help but to my greatest surprise he told me that he will help me with my case and here I am now celebrating because my Husband has changed totally for good. He always wants to be by me and can not do anything without my present. I am really enjoying my marriage, what a great celebration. I will keep on testifying on the internet because PRIEST OSAS  is truly a real spell caster. DO YOU NEED HELP THEN CONTACT PRIEST OSAS NOW VIA EMAIL:Unsurpassed.solution@gmail.com or call WhatsApp +1(419) 359-4367  He is the only answer to your problem and makes you feel happy in your relationship
https://unsurpassedsolutionhome.website2.me/