There have been (and continue to be) many times during my research efforts on my current unnamed work-in-progress when I asked myself, “What possessed you to set a historical novel in medieval Venice?”

The answers seemed simple when I chose the time period:

(2) In Courting Cassandry, I mentioned that Gerolt had visited (among other places) Venice when he was nineteen years old and I thought Venice would be an easy city to research, because it’s so famous. (This was the biggest error in my thinking, but I didn’t know it at the time.)

(3) And I thought setting a book in Italy would be a fun way to honor my Italian ancestors, even though none of them came from Venice specifically, so far as I know.

However, to my consternation, I have found researching 12th Century Venice (the year 1170 specifically) to be maddeningly frustrating. There is a wealth of information on Venetian politics and Venetian trade, neither of which my story centers on other than in a tangential way. But trying to discover day-to-day-life type information has me all too many days banging my head against the wall. There are fascinating bits of information I could use if I could set my story just a few years later, but I’m locked into the year 1170 by the age of my character Gerolt in Courting Cassandry, which has been published for over 6 months and can’t be changed now. 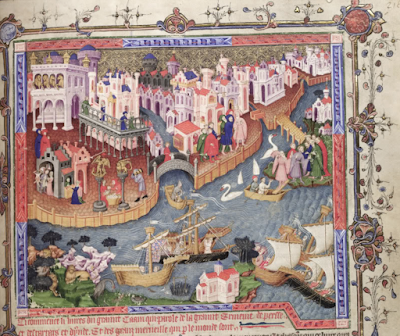 (miniature of Venice, "The Travels of Marco Polo", c.1400 (Bodleian Library -
too late for my time period of course)

Day-to-day-life information is widely available for the Renaissance, and somewhat more available a few years and decades after 1170, but for my particular year it is proving to be sparse. I have a sense that there may be records available which have simply not been translated into English, but since I can’t read Italian, they’re no help to me. Information on subjects such as food, dress, housing, what did the women do all day, how were children raised, etc., can be easily found for England, France, and even to some extent Germany, but not for Italy. To complicate matters, Italy was not a united country in the Middle Ages, it was made up of independent city-states, so that one cannot absolutely extrapolate that, say, the rules of inheritance in one city or the way women were limited or not limited in another was also the case in Venice.

I am, however, gradually finding bits and pieces to help me set my story with what I hope will be some degree of authenticity for my chosen year. I am going to share with you what I do succeed in finding as I research, in the hopes it might be useful to some other struggling writer who wants to set a story in 12th century Venice. As I do so, if any of you know of any additional resources beyond those that I share (available in English, please) or have any further information on any of the topics I cover, I would be ecstatically happy if you shared your knowledge in the comments!

I share your frustration, Joyce! I too have hunted for the low-down on medieval Venice.
A few useful books I've come across are: Lane's Venice: A Maritime Republic (1973); Thomas F. Madden, Venice: A New History (2012); and Christopher Hibbert, Venice: The Biography of a City (1989).
But they're all fairly general and you've probably come across them already.

Hi Carol! I'm excited to find a fellow traveller on the medieval Venice research train. :-) Maybe we can help each other along the way. I do have Lane's "Venice: A Maritime Republic" in my excruciatingly small research library for medieval Venice. I've browsed the other two titles on Amazon, but as you say, they look too general for my purposes so I haven't invested in them. (Yet anyway.) I'll be sharing some of the information I have successfully found along with the sources soon. And if you come across any additional information in your own hunt, I'd love to have you share!