"Every One a Witness" Series 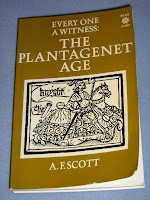 It seems like all the best research books are out of print! That is again the case with one of my favorites, The Plantagenet Age: Every One a Witness, by A.F. Scott. I found my copy in 1976 at the University of Arizona student bookstore. It was part of a series of Every One a Witness books.

Fortunately for those of us who delight in “first hand history”, there appear to be plenty of people willing to sell their old copies at quite reasonable prices on such websites as Amazon.

The Plantagenet Age (also subtitled, Commentaries of an Era) is a compilation of contemporary source materials beginning with the reign of King Henry II through the death of King Richard III, last of the Plantagenet kings of England. But these are no dry political treatises by those who kept the royal chronicles. Although royalty is, indeed, included, the majority of the book covers such wide ranging topics as towns, family, food and drink, dress, education, sports and pastimes, travel, law and crime, and many, many more subjects.

(Ack! Two of my pages just popped free of their binding! Now I’ll have to take extra-special care not to lose them. Old, dried-out bindings can be so annoying.)

On with the examples I promised!

On the subject of “Health”, here is a quote from John Arderne’s 14th Century Treatise on the Fistula:

“And if the patients or their friends or servants ask by what length of time he hopes to cure the complaint, let the doctor always promise double what he supposes: that is, if the doctor hopes to heal the patient in twenty weeks—that is the common course of curing—let him add so many over. For it is better that the term be lengthened than the cure. For to prolong the cure brings despair to the patient, when trust in the doctor is the strongest hope of cure. And if the patient wonders why he was told the cure would be so long when he was healed in half the time, tell him he was strong-hearted, bore the pain well and had a body to heal quickly. The patient will be proud and delighted to hear such words.” (The Plantagenet Age, p 131-132)

Under “Sports and Pastimes”, the following story is told of a tournament that took place in 1347:

“And a little before the feast of St. Michael at London in Chepe there were very beautiful lists. Here the lady Queen Philippa [wife to King Edward III] with a great party of her ladies fell to the ground from the pavilions which had been newly built so that they could watch the knightly deeds; but they were not hurt. That most pious queen would not allow the carpenters to be punished for this, but she assuaged the anger of the king and his courtiers with prayers on bended knee. This merciful act of the queen aroused the love of all towards her when they considered her piety.” (The Plantagenet Age, p 119)

In 1381, Thomas de Walsingham wrote in his Historia Brevis, the following regarding Wat Tyler and his followers:

“See too what they did against the faith; how they compelled masters of grammar schools to swear that they would never again teach grammar to children! It was perilous to be recognized as a clerk, and far more perilous if any were caught bearing an inkhorn at his side.” (The Plantagenet Age, p 92; I know more than a few modern school children who would have sympathized with Wat Tyler on this subject!)

Let’s see if I can find one more short passage to share with you. After that, you’ll have to find a copy of this delightful book for yourself.

Ah, let’s end with this. “Medieval amusements around an evening fire” recorded by Wynken de Worde in 15th Century England. Try these on some of your friends, and see if they’re any smarter than our medieval ancestors!

Whether the audience groaned when the answers above were revealed, Wynken de Worde fails to tell us.

The Plantagenet Age is not only a solid research source, it is also a delightful “browsing” book for the modern reader interested in fascinating bits of historical trivia.

And it is not alone. In addition to The Plantagenet Age, these titles are also available in the Every One A Witness series: 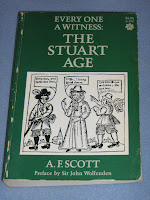 Not all of these are available on Amazon. You can Google “books by Arthur Finley Scott” to find additional buying options from both US and British booksellers. And don’t forget, you can always try interlibrary loan. Surely some library somewhere in the United States has copies, too!

REMINDER: My drawing for a copy of A History of Feasting in the Middle Ages, With 25 Authentic Recipes ends on Friday, June 20th. To read more about this chapbook and how to enter my drawing, see my post on Let’s Have Another Drawing.
Posted by Joyce DiPastena at 5:43 PM

Thank you for your long post on this special book.

I like that era too, lots of great history !!