Sadly, neither do I. Speak Occitan, that is. What is Occitan? It is a Romance language that was spoken during the Middle Ages in a region of southern Europe known as Occitania: southern France, Monaco, and parts of Spain and Italy. For the purposes of my current WIP, it was spoken in the duchy of Aquitaine during the 12th Century. 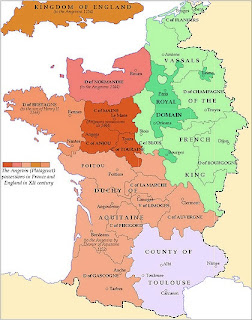 (Here's a map of Aquitaine and Poitou, where Occitan was spoken, when they were ruled by the kings of England, during the time period of my novels.)
Dante recorded the first known reference to lingua d’oc, the origin of the word “Occitan”. His statement in Latin, “nam alii oc, alii si, alii vero dicunt oil" ("some say òc, others say sì, others say oïl") referred to the word “yes” in three different languages: òc in Occitan, sì in Italian, and oïl in French.
Occitan was the language of the medieval troubadours, and since my hero is a troubadour, I found myself on a search this week to find a few Occitan words. I found two English-Occitan glossaries at http://www.occitania.online.fr/aqui.comenca.occitania/en-oc.html and http://tourisme.cevennes.lasalle.pagesperso-orange.fr/text/english/glossaire.htm.
These lists were helpful, but more limited than I had hoped. Then I stumbled across an incredibly nifty little device called the Occitan’s automatic translator: http://traductor.gencat.cat/text.do Unfortunately, to use this translator, I needed to know Catalan, a language to which Occitan was apparently closely related. Happily, however, there are websites that will translate English into Catalan, such as Google Translate: http://translate.google.com, and from there, I can go to the Occitan’s automatic translator and translate from Catalan to Occitan.
For example, in Google Translate, I typed in: “Excuse me, do you speak Occitan?” in English and asked it to translate into Catalan, which gave me: “Perdoni, es parla occità?” Then I hopped over to the Occitan’s automatic translator, copied and pasted “Perdoni, es parla occità?” and asked it to translate from Catalan to Occitan, which gave me: “Perdonatz, se parla occitan?”
See? Didn’t I tell you that device was nifty?
And here’s another cool tool. (Yes, I know that rhymes.) Forvo: All the words in the world pronounced. Here’s the link for Occitan: http://www.forvo.com/languages/oc/ Unfortunately, you can’t type in a phrase and hear it pronounced. But you can type in a word from one of the above glossaries, such as “bruch”, which means “noisy” in Occitan. (I may have a noisy character in my WIP, so “bruch” may come in useful.) Forvo only has 3386 Occitan words you can listen to so far, so you’re a bit limited, but it’s still cool.
To read more about the Occitan language, you can visit Wikipedia: http://en.wikipedia.org/wiki/Occitan_language.
If you’re really ambitious and want to try to learn to speak Occitan, this site can direct you to some sources, though I in no way vouch for any of the links or resources: http://www.language-learning-advisor.com/learn-occitan.html.


Here's a link to a map of Occitania: http://www.fchatzigianis.com/photos/uncategorized/2008/08/23/occitaniamap.jpg (I wasn't sure of copyright issues, so I couldn't use it on this post.) You'll see Aquitaine/Aquitania over on the left, and see how the area that covered Occitania fit between Franca/France, Espanha/Spain and Italia/Italy.
Posted by Joyce DiPastena at 10:00 AM