How’s the Weather Out There? Or Another Lesson in Serendipity 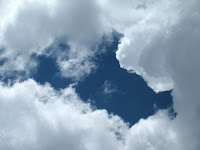 So, what was the weather like during the Middle Ages? If you think the weather in England in 1066 was an exact reflection of the weather in 2011, you would be mistaken. And since we are all seeking authenticity for our historical novels, we don’t want our characters shivering through an extraordinarily warm winter, or reaping a rich harvest during a summer of drought, now do we?

The  problem is, of course, that it’s very difficult to know exactly what the weather was like on any given day during the Middle Ages. And some sources contradict each other.
All the information I’ve come across for medieval weather has happened by serendipity. You know, by accident while I was researching completely different topics. But every time I find a clue, I underline or highlight it and make a note so I can find it again.
For example, I stumbled across this sentence while researching the Norman Conquest (referring to the year 1066):
“For a long time, England had been colder and wetter than it normally is, but it was entering a phase which lasted two centuries when the summers were unusually warm and sunny and the winters mild.” (From 1066: The Year of the Conquest, by David Howarth, p 11)
Aha! thought I to myself. I’ve got a WIP set in England during 1213. Two centuries from 1066 easily covers my time period. Therefore, the summer was “warm and sunny” and the winter was “mild”.
Wasn’t it?
Then, while reading a biography of Henry II, I came across this:
“In Henry’s days, the winters were harsher, the summers drier.” (From Henry Plantagenet: 1133-1189, by Richard Barber, p 1)
Okay, so drier summers might well be compatible with the “unusually warm” summers cited by Howarth. Whereas Howarth offered no source information for his weather pattern, Barber refers to medieval “annals’” frequent reference to droughts, although his claim for the harsh winters relied on the fact that in 1142, the Thames froze in early December and no one remarked upon it as being unusual.
If I were setting my story in England during the reign of Henry II, I’d feel safe inflicting exceptionally hot summers upon my characters. However, unless that story was set in 1142, it might be a bit of a coin toss whether you want to go with the “mild” or “harsher” winter.
However, if you decide to set your story in the winter of 1204-1205, here’s a bit of reliable weather-related information you can use, discovered (and notated) during my recent reading of a biography of King John. “The rivers froze after Christmas and the Thames could be crossed on foot.” The ground was so hard frozen that it was March before ploughs were able to break the surface. Vegetables shriveled from the extreme cold of that winter. When spring finally arrived, corn sold “at famine prices. Oats fetched ten times the normal price, and men were paying half a mark for a few pence worth of peas or beans.” (King John, W.L. Warren, p 105)
Warren discovered this information in something called the Roll Series, which if you Google, you will discover is a major collection of British and Irish historical materials based on medieval English chronicles, which is as authoritative a source as you can find.
Oh, and the source for the claim that for the two centuries following 1066 “summers were unusually warm and sunny and the winters mild”? I did some Googling about that, too, and the answer? Tree rings. J
My reading (and therefore, my serendipitous discoveries) have not extended much beyond the reigns of King Henry II to King John because that’s the time period that my novels are set in. But if you have come across any other authoritative evidence for other medieval years, I would love you to share your information in a comment. Please include your source: Title, author, and page number, along with your information. (In case you haven’t noticed, this blog isn’t just about medieval facts. It’s about how we know those facts. So always cite your sources. Thank you!)
Posted by Joyce DiPastena at 3:52 PM

I love all the info on your blog.
Ann