The historical research information in The Illuminated Manuscript, by Janet Backhouse, lacks the helpful subject headings of The Book of Hours and Illuminated Manuscripts, with all the information running in one long narrative form between the pictures. One is therefore required to pretty much study the entire text, at least up through whatever century you have chosen to place your story in. It’s all easy, non-intimidating reading, though.

My novel, Illuminations of the Heart is set in the year 1180, so for the purposes of my particular story, I was able to stop highlighting information (which I did with a nifty pink marker) once the narrative reached the 1200s and later. Most of the information was very basic, but again, it proved a starting point in my research, raising subjects in my mind to pursue in greater depth elsewhere. For example, a very brief discussion of inks and paints used in illuminated manuscripts made mention of “the most exotic” of paints made from a mineral called lapis lazuli. This mineral, the text said, was mined in far-off Afghanistan. Little more was said about this paint, but I immediately knew I wanted to incorporate its use into my story, and made a mental note to research this paint further.

Some other facts I learned that played parts in my story:

There were other fascinating bits of information I picked up from The Illuminated Manuscript, but since they did not appear in my novel, I will reserve my discussion of them until they work their way into a future story of mine. :-)

D.M. Gill’s Illuminated Manuscripts similarly interweaves text with picture replicas. However, t his book is broken down into helpful subsections: A Short Chronology; Early Middle Ages, divided between Sixth to Ninth Centuries, Ninth to Eleventh Centuries, and Twelfth Century; Late Middle Ages, which covers the Thirteenth through Sixteenth Centuries; Materials and Manufacture; Other Cultures, focusing on Jewish and Spanish illumination; and a Conclusion bringing us up to the printing press. 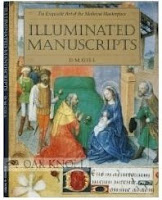 I found the section on Materials and Manufacture to have the most practical application for my story. This section discusses (in greater detail than Backhouse’s book) how parchment was made; how pages were “ruled’ in preparation for adding the text; what kinds of pens and inks were used; how paints of various colors were prepared for the illuminated miniatures (including another reference to lapis lazuli); the application of gold or silver leaf; how the final, completed book was assembled; and even how much some “professional illuminators” charged for their work. I was not able to use a fraction of this information in my novel, Illuminations of the Heart, but I certainly now have a treasure trove of interesting facts for future projects!

I have a few more titles related to illuminated manuscripts to share with you in my next blog. Until then, you might check out the comment left by writemedieval on my last post to check out two books on illumination by Christopher de Hamel. I’ve already put both of these books in my Amazon shopping cart!

Posted by Joyce DiPastena at 5:16 PM

I guess one of the big things I remember about those manuscripts was the use of arsnic in some of the ink!