Okay, so I admit it. It’s been, like, forever since I’ve blogged here. My apologies. I kind of got lost in “life” for awhile. There’s good news, though. Remember that detour I told you about, putting my next medieval novel, Illuminations of the Heart, on hold while Leatherwood Press re-published Loyalty’s Web? Well, not only has Leatherwood decided to publish Illuminations of the Heart as well (under a new imprint of theirs called Walnut Springs Press), things have proceeded along so swimmingly that the book has been typeset, the cover art has been finalized (see right), and ARCs are being sent to reviewers, even as I type this! You can read the back cover blurb on my companion blog, JDP NEWS, and the first chapter there as well, if you like. If you do so, you’ll discover that the heroine of my new medieval romance is a medieval illuminator. So it only seems appropriate that I resume my posts to medieval research with joyce by sharing with you a few sources I used for my novel regarding medieval illumination.

The chief problem I discovered with researching books about medieval illumination was the indexes…or to be more precise, the lack in most instances thereof. Three of the initial source books I used for my research were: Illuminated Manuscripts, by D.M. Gill; The Illuminated Manuscript, by Janet Backhouse; and The Book of Hours, with a historical survey and commentary by John Harthan. Now indexes are my favorite method of “short cutting” research. Instead of reading an entire book on a subject that might contain only a fraction of needed information for one’s project, one can look in a good index and zero in on a subject, such as, let’s say in the case of medieval illumination, “inks”, “paints”, or “writing implements”. However, I discovered that many books about illuminated manuscripts are treated as art books, rather than research books, and whoever the powers-that-be are who are in charge of assembling such books tend to place the emphasis on the undeniably beautiful examples of illuminated manuscripts through the ages, rather than the process by which such manuscripts were made. Hence, the bulk of the three books listed above are made up of page after page after page of examples of beautiful artwork from medieval manuscripts. But an index? Only one of these three books had one, and the exception—in The Book of Hours—was made up almost entirely of the names of artists, names of manuscript collections, and names of historical personages. Hence…no short cut to the research process in the back matter. 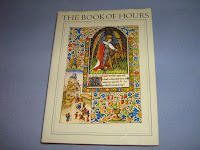 Fortunately, however, each of these books had plenty of front matter preceding the replica portions to provide me with lots of information on how the replicas to follow were originally created. And in this front matter, two out of three of these books broke this information down into subject headings which did assist in speeding along my research.

For example, my heroine in Illuminations of the Heart had no intention of creating a Book of Hours, at least for the duration of this part of her story. (What she might have created after I typed “the end” is another matter entirely!) But the front matter of The Book of Hours is broken down into these categories: “Historical Evolution”; “Contents”; “Decoration”; and “Social Aspects”. The historical evolution of the Book of Hours was not pertinent to the story I was telling, so I could simply skip over this part. Under the heading, “Contents”, I did find some useful information regarding the Gradual Psalms, and since my heroine did, in fact, illuminate a psaltery in my book, this portion of the front matter was very helpful. Most of the information under “Social Aspects” did not prove pertinent to the current needs of my book. Hence, I zeroed in on the part about “Decorations”. This, for the purposes of my novel, proved the most helpful portion of The Book of Hours. This section taught me about pattern books (books designed to show a patron examples of the illuminator’s range of artwork); how books were first ruled by the scribe, prior to either calligraphy or miniatures being added; how spaces were deliberately planned out ahead of time and left in the text for illuminated letters or images to be added later; and the method by which such decorations were ultimately added. All of this was discussed in very brief detail, requiring me to seek out further sources that would provide me with greater depth of information, but this section did prove an excellent starting point for suggesting to me what kinds of information I needed to delve into more deeply. And its description of decorative letters inspired a scene in my book where my heroine paints an image of the Biblical shepherd-king, David, inside the loops of a large, illuminated “B” in the word “Blessed” at the beginning of the first verse of the Gradual Psalms. (Granted, I used the English, rather than the Latin, form of this Biblical text, but that was to impart a greater emotional impact of the verse on the reader.)

I was going to share with you information on illuminations gleaned from the other two source books I mentioned above, but I think this post is long enough as it is. So here I will stop, but this time I promise to return, sooner rather than later (certainly sooner than eight months later!), and share with you my experiences with Janet Backhouse’s The Illuminated Manuscript and D.M. Gill’s Illuminated Manuscripts.

Argh!!! Once again, I discover that one of my treasured research books is apparently out of print. But once again, there appear to be multiple used copies of The Book of Hours by John Harthan available on Amazon, so my guilt at referring you to another out-of-print book is slightly salved. It hasn't been the first time, and unfortunately, it more than likely won't be the last!

Posted by Joyce DiPastena at 9:38 PM

You may like Christopher De Hamel's books on illumination as well. This one is a short introduction to the subject and this one goes into more detail.

Thank you for the tips, writemedieval! I've added both books to my Amazon shopping cart. :-)