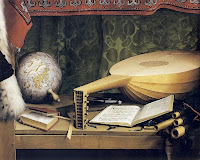 The hero of my current WIP, The Lady and the Minstrel, is…well, a minstrel. Every good medieval minstrel needed an instrument, and for my hero, Robert, his instrument of choice is the lute. I don’t play the lute. I don’t own a lute. How can I, then, learn how to describe my hero’s lute? I can look at pictures, of course, but I wanted to go deeper than that. Here are some of the internet links I used to help me “put the lute together.” I’ll tell you how I used each link, then I’ll show you how I assembled all of this information into an actual scene.

Yes, I began with Wikipedia for the basic components of lute construction:

This article broke down the components of a lute into the following parts: soundboard, back, neck, belly, bridge, frets, strings.

While I don’t like to rely on Wikipedia as my sole research source on a subject, it is often a good beginning point. This article gave me the terminology I needed to research further. When writing a fiction scene, you don’t want to describe every minute detail of an object. It is best to seize upon a few aspects and highlight those for the reader, just enough to give the reader a flavor of what you are describing. After studying this Wikipedia article and comparing it against a Google search for pictures of lutes, I decided for my description to focus on the following parts:

The soundboard, with its sound hole or rose
The neck, with its pegs
The back
The belly
And a brief, non-specific mention of the strings

From the Wikipedia article, I learned that a lute is made from a combination of woods. Here are the websites that helped me decide which specific woods to use for my hero’s lute:

Build Your Own Renaissance Lute! : http://www.vanedwards.co.uk/renwood.htm This site gives a list of wood options for each of the lute’s components (neck, ribs, soundboard, pegs, etc), along with dimensions needed to build an actual lute. I didn’t go that far in my description, but you might like to in your novel!

A web page with answers to the question: “Which is a more naturally resonate wood?” : http://www.thegearpage.net/board/archive/index.php/t-282046.html

After studying the above two sites, I decided to go with the following woods for my hero’s lute:

But there was one final check I needed to do. I needed to be sure the woods I was using were actually available in Europe and England during the Middle Ages. To my excitement, I stumbled across this lovely site:

Woods in Use in the Middle Ages & Renaissance : http://www.medievalwoodworking.org/articles/wood.htm

This article confirmed that I was good to go.

After researching all of the above, here is the scene I came up with. I’ve highlighted the lute description words in red so you can see how I worked them into the scene.

Robert removed the lute from its case, and set it in her lap.

“Oh!” Marguerite exclaimed. “The design of the rose is lovely.”

Robert felt a surge of pride at her pleasure in the intricate grillwork over the sound hole. “My father carved it,” he said. “He fashioned the entire instrument for my mother and gave it to her on Epiphany when I was seven years old. I helped him gather the wood late at night while old Lord Simon slept. A minstrel who was passing through the village told us which wood was best: ash for the soundboard, boxwood for the neck, strips of maple for the ribs on the back.”

She had pushed off her hood as he spoke and listened with her gaze flitting alternately between the instrument and his face, but she tilted the lute now to examine its deep, rounded body. He admired the graceful turn of her cheek, the whimsical freckles dusted across her small nose as he continued.

“The minstrel showed my father the thickness to cut the wood and showed him how to bend the ribs to form the belly so that the sound would be the sweetest. Father let me slide the pegs in their places after he had carved their notches before he attached the strings. In truth, my contributions were small, but at the time, I felt for all the world as though I had labored over the gift quite as much as he.”

Can you see how I only used a few elements from all the research I did to put together this description and how I tried to work in the description naturally through a dialogue section? Accurate research is crucial, but you don’t want to use so much of what you learn that it bogs down the story.

If you’d like to do a little writing exercise yourself, study the links I shared with you above and put together your own scene describing a medieval or Renaissance lute. If you’d like to, share it with me in a comment on this post. I would love to hear what you come up with!

(Painting: detail from "The Ambassadors", globe, lute and books, by Hans Holbein the Younger)
Posted by Joyce DiPastena at 2:42 PM

Labels: instruments, lutes, The Lady and the Minstrel, woods