Google Isn’t the Answer to Everything! 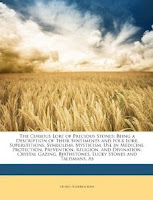 So last night I was doing some research for my latest work-in-progress. (Yes, believe it or not from my lengthy absence from this blog, I actually am still working on my work-in-progress!) I have this book called The Curious Lore of Precious Stones, by George Frederick Kunz. In it, I found the following statement:
“There is established a very pretty custom of assigning to the various masculine and female Christian names a particular gem, and such name-gems are often set together with natal and talismanic gems and with gems of one’s patron saint.” (pp 46-47)
Kunz includes sample lists of name-gems (example: Mary = Moonstone, James = Jade, Thomas = Topaz, etc). He also includes lists from various cultures and time periods of natal, or birthstones. But nowhere in the book could I find a list of gemstones for patron saints.
What to do, what to do? What else but hop on the internet! I thought I would track down such a list very quickly, print it out, and stick a copy in The Curious Lore of Precious Stones for future research reference. Instead, I spent nearly two hours typing in every combination of words I could think of in a vain effort to find any such list. The closest I could come was a list of gemstones assigned to the original twelve apostles from a website called Fifteen Promises Heritage Rosaries, which gave me a list of stones for the original twelve apostles in the New Testament and stones for twelve guardian angels. The source of this list was not cited.
I continued my fruitless search, until at last, I decided that perhaps Kunz’s reference to “patron saints” had not referred to Catholic saints in general, but had been intended to be limited to the original twelve apostles. (Though I would have appreciated it if he had simply said as much to begin with!) So, I stopped typing in “saints” and “Catholic saints” in front of words such as “gems”, “gemstones”, “precious stones”, “stones”, etc, and began adding the word, “apostles”. Not only did information finally start popping up, but nearly every site, after explaining the arguments for and against assigning gems to the apostles, referred me back to their prime source for their information: The Curious Lore of Precious Stones, by George Frederick Kunz! One site called it “the definitive book on fascinating, traditional gem lore.”  (Jewelry Mall)
So back I went to where I had started in the first place: The Curious Lore of Precious Stones, sitting right beside my laptop with my WIP. The drawback to this book is that, while it does have an index, it’s not a terribly exhaustive one, so it took some hunting to see if I could find any information about the “apostle stones”. Eventually I did, although it was not in list form, as the name-stones and natal-stones had been. (Which is why it was more difficult to find.) Instead, the information was embedded in a long treatise by Andreas, Bishop of Caesarea, who lived in the tenth century. The information matched exactly with the internet list from Fifteen Promises Heritage Rosaries, though I had to “pull it out” of Andreas’ text. (The origins of this information are important for me, since once again, my WIP is medieval and my characters need access to information that would actually have been available during their lifetimes.)
So now, at last, after having gone in a very wide circle, I end up where I began with the information I was looking for in same book I started out with in the first place.
So, if you are looking for “definitive” information “on fascinating, traditional gem lore”, I’d suggest you skip right over Google and go straight for George Frederick Kunz’s book, The Curious Lore of Precious Stones. Just be prepared to read carefully, because the index can sometimes be less than helpful in quickly locating specific information.
(By the way, if anyone out there knows a list assigning gemstones to Catholic saints beyond the twelve apostles, I would love to know about it!)

Posted by Joyce DiPastena at 6:41 PM

Very cool. You read the most intriguing books, Joyce.