Women Riders: Jot That Down!

Recently while asking for feedback from some other authors on a scene I had written for my current work-in-progress (a new medieval novel), one author who sets her stories in a later historical time period, questioned the fact that my heroine was riding her horse astride rather than sidesaddle. To be truthful, I found myself startled that I had written the scene that way. I had done no immediate research to put my heroine astride in her saddle, yet somewhere in the back of my mind, I had known that for the Middle Ages, this was the correct way for a lady to ride a horse. Somewhere, very long ago, I knew I had read that kernel of information in a research book. But where?

Fortunately for me, I have my research books loosely filed according to subject matter on my bookshelves. To date, I own only one book specifically on medieval horses, and that one deals with the medieval war horse, not exactly the subject I was looking for. So I went to my section on “medieval women” to see whether I had written my riding scene correctly or not. Sadly, every one of my indexes let me down in finding a quick answer. So I browsed the tables of content until I found a chapter labeled: “Lifestyle and Travel” in English Noblewomen in the Later Middle Ages, by Jennifer C. Ward. Flipping to, then through this chapter, I found the following sentences: “There were several ways in which the noblewoman could travel. One way to travel was to ride, usually astride…” This last phrase was followed by a footnote. Following the footnote to the bottom of the page, I found the reference: J.J. Jusserand, English Wayfaring Life in the Middle Ages, London, 1891, 100-105.
“I know that book!” I said. Even more excited, I exclaimed, “In fact, I own that book!”
English Wayfaring Life in the Middle Ages was one of the first additions to my medieval research library, owing to the fact that I had a particular interest in medieval “travelers” while writing my very first medieval novel. And thanks to my loose filing system, I knew immediately where to find it. 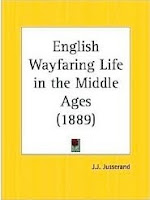 The bad news was, the page numbers listed in the footnote citation in English Noblewomen in the Later Middle Ages did not match up with the pages in my edition of English Wayfaring Life. Instead of women riders, I found myself reading about English minstrels. (They were walkers, not riders.) Once again, the index failed me, too. However, curiously enough, for 7 pages out of 315 page book, something had inspired me to jot notes in the margins of Chapter II, “The Ordinary Traveller and the Casual Passer-By.” And one of these jottings turned out to be “women and riding.” Bingo! Here I found the affirmation that I was looking for that women did, indeed, ride astride during most of the Middle Ages, that the side saddle was not invented until late in the 14th Century, and even then rarely used, and even a description of the saddles that were used at the time.
Here, once more, is evidence that, however irksome and time consuming it may feel at the time, you will never, ever (EVER) regret jotting notes in the margins of your research books to help you quickly reference specific topics discussed in each chapter. (Now I just need to re-read the whole book and fill in the rest of my “jottings”.)

English Noblewomen in the Later Middle Ages (The Medieval World)

Posted by Joyce DiPastena at 1:49 PM

When I researched this topic I found conflicting evidence. I believe there were earlier side-saddles - I once saw one allegedly dated to 1000 AD - but all medieval side-saddles were more precarious than the modern versions and I suspect that they would not have been safe for hunting, for example.

The (relatively) early Ellesmere Manuscript of The Canterbury Tales shows the Wife of Bath astride and the Prioress side-saddle. That's typical of the contradictions one finds in sources.

Thank you for sharing your research. I agree, that the evidence can be conflicting, so I appreciate you pointing that out. My research was focused on the late 1100s when my novels are set. By the time of Chaucer and The Canterbury Tales, I, too, have read that the side saddle was beginning to come into some degree of usage. Because the Middle Ages lasted 1000 years, when researching, one must always be careful to focus on the specific years one is writing about, because what might be true for the 1100s, might not be true for the 1300/1400s, for example.

Again, thank you for your comments. I always appreciate additional insights from other researchers. I learn so much from you all!

Hi joyce
Thankyou for your post about women riders in the middleages. I am just pondering a dilemma that i have for my heroine who exits in the 11thc. I want ther to ride astride the saddle as i know this suits the scene musch better, however, i want it to be authentic. I came across your blog and feel confident now that she can do so. I remember also a snippet somewhere when i was doing research and the subject was not about women riders. Like you i should have written it down somewhere. I was reading about the Empress Maude's escape and apparently the chronicler had written that she suferred chafed thighs which she could have only have gotten riding astride! However, contrary to this, i recently came across an image on the internet of an 8thc woman riding sidesaddle accompanied by an army!Why oh why did i not save this to my computer i'll never know! Anyhow, that aside, perhaps there were different modes of riding for women for different purposes. If you had to flee from your pursuers you would have to ride astride to go anything like fast? Anyway, I hope this helps in someway as your post has helped me!

manythanks
Paula Lofting Wilcox, author of Sons of the Wolf

This is fascinating, thanks for sharing. It's been a topic of debate between me and my writer friends. It does make sense that in a situation where haste is called for, riding astride would be the better course for handling the mount. I still wonder whether it would have been commonplace outside that situation. Where's a time machine when you need one?

Yes, a time machine would certainly be helpful for us historical writers, wouldn't it! Until someone invents one, we'll just have to keep helping each other along like this. Thanks so much for your comments!

OMG you'll never believe it but I found that image of an Anglo Saxon riding side-saddle with an army. It was on my hard drive all the time!

That's great, Paula! Believe me, I know how exciting it is to find "lost" information tucked away on your computer!

Hi Research Blog! Your riding project sounds exciting! Unfortunately, for the time period I focus in (12th/13th centuries), I'm not aware of any specialized clothing that either men or women used for riding. I think that came in at a later period. Joan of Arc is said to have worn armor, but in 12th/13th century England and France, I'm afraid I don't know of any women who wore armor or jousted. The swords were pretty heavy, so likely a woman would have had to have a specialized, lighter sword made for her to use effectively. I don't know of any records where women actually fought with swords in those centuries, though. They might have used a dagger at close quarters. Most often, women would use something more subtle like poison. It's popular to blur the lines today to portray medieval women doing everything that medieval men did, but that wasn't a reality of the time period, so there are no records either written or in art to suggest what such women might have been like. Sorry I'm not more help!