On September 10, 2009, my Medieval Word of the Day was Bestiary: a collection of drawings or paintings of animals, real or imagined, accompanied by their physical and allegorical descriptions. 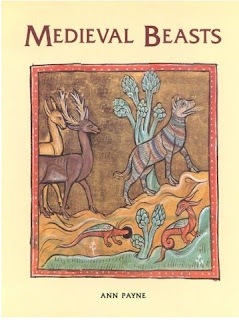 Medieval bestiaries play a small role in my medieval romance, Illuminations of the Heart. My heroine’s brother “illuminates” a bestiary to prove to his illuminator father that he’s ready to be advanced from apprenticeship in their shop. My heroine, Siri, practices her own drawing skills in the gardens of her new guardian, Triston de Brielle, while sitting with Triston’s young son Perrin and cousin Acelet. While conversing with them both about her new home, she draws a bee with a crown hovering above it in the air, and explains to Perrin that swarms of bees are led by a king bee. Yes, it’s the very opposite of what we know about bees today, and a friend who read my book challenged my writing of this scene. But because I had read Medieval Beasts, by Ann Payne, I was able to explain to my friend that in the Middle Ages, people not only believed that bees were lead by a king rather than a queen, but that bees, like most of the animal kingdom, represented some kind of allegory, or moral story, to the people of the Middle Ages. The allegory of the bee, as my heroine explained to her companions, went like this:

“Bees are led by a king, as are we," she said, ignoring the resentful glance Acelet sent at the boy. "He is a most benevolent ruler, leading by example and never turning his sting upon malefactors. He has only to demonstrate to them the error of their ways, and in shame they will turn their own sting upon themselves.” (Illuminations of the Heart, p 76)

If you are interested in sampling a modern reproduction of a medieval bestiary, Medieval Beasts by Ann Payne is a delightful place to start!

Posted by Joyce DiPastena at 7:03 PM

Labels: bestiary, excerpts-Illuminations of the Heart